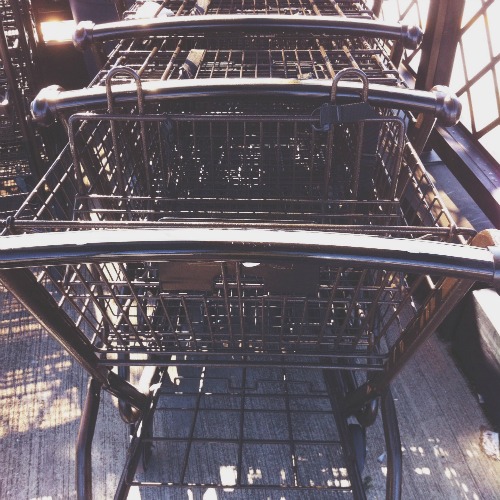 i’ve got a few pet peeves.  one of them involves shopping carts.

yesterday, after paying for my groceries, i walked out to the car and unloaded the goods.   then i took my cart to the shopping cart corral in the parking lot.  a mess.  the carts were turned this way and that; only two of them were pushed into each other.  i know this may not faze any of you.  but it fazes me.  makes me just a wee bit crazy.  because really, are people in such a hurry that they can’t push their carts into the one that’s been left ahead of theirs?

apparently, some people can’t.  because nearly every time i go to the grocery store, the place for returning carts is a mess.  no biggie, you say.  and i know that.  but it’s a pet peeve.

so i organized the messy carts and got them all pushed into each other.  took me all of 20 seconds.  and the person whose job it is to collect the carts and bring them back to the store…well, i like to think i just helped make his or her job a tiny bit easier.  there was a gentleman parked next to the shopping cart corral and he was watching me through his window and i think he was chuckling, though i’m not entirely sure.  and i suspect he would have chuckled even more if he knew that i waited for him to pull out of his spot so that i could go back and take a picture of the carts.

cause, you know, i couldn’t resist.  i was having myself a little moment.  a peevish moment, but a moment.