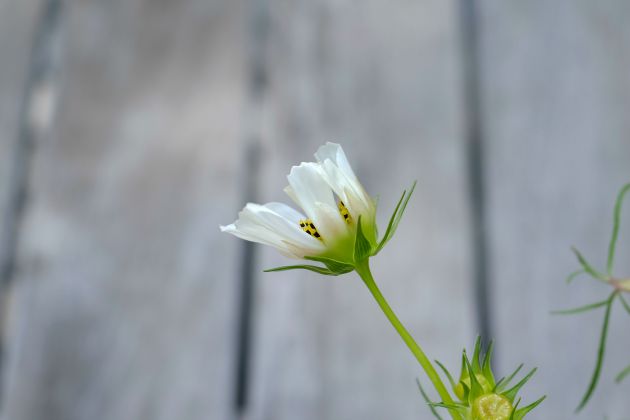 I brought some cosmos clippings indoors recently and, when the blooms began drooping, I prepared to toss them.  But then I noticed the buds (so many of them) on the stems.  They were wrapped in a nearly-transparent, waxy kind of flattened disc. How did I not notice this before?  Something about the waxiness, something about the flattened form caught my eye.  I was enthralled.  I called my daughter over to see.  Old news, apparently.  How did I not notice this before?

I plucked the dead blooms from the bunch and placed the stems with those incredible little buds into a small jar of fresh water.  I placed the jar on the kitchen window sill where I knew I’d have daily opportunities to look.  And I’ve been looking, trying to catch the forms opening little by little.

So the flattened discs (you can almost see one in the image above) puff a little and then the petals unfurl one by one.  And you know what?  That in-between stage…when it’s part puffed disc and part one-or-two-or-three petals poking through?  Well, it’s not really that pretty. Truthfully (no offense, dear cosmos) it’s a little awkward looking.

Eventually the disc shape is gone, the waxiness is gone, the awkward poking petals are gone, and there are petals standing tall.  They stand straight out from their center, tall and confident.  But they don’t stop there.  Once tall, they proceed to fall backwards, radiating outward from their center.  They relax into shape.  Still strong, still confident.  Now relaxed.

Lessons, once again, in the garden.  How did I not notice this?